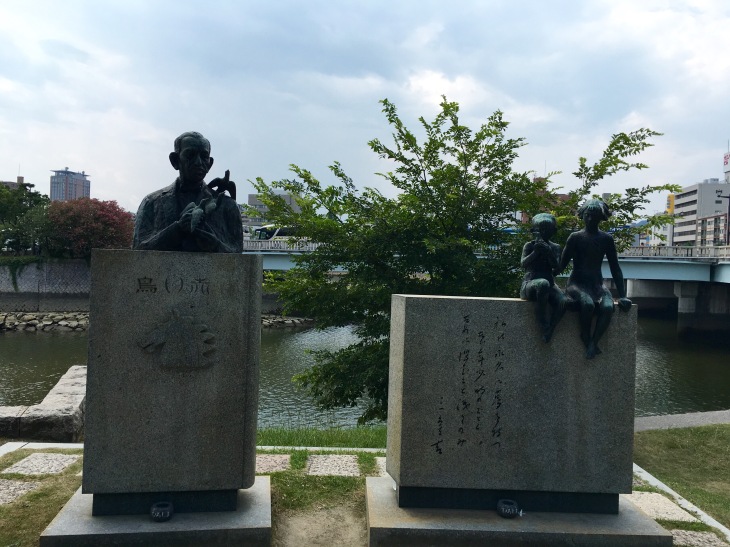 If you are visiting Japan, don’t let go of a chance to visit Hiroshima. Though there are many interesting places to visit in Hiroshima, but a visit to the Hiroshima Peace Memorial is a must. It is worth taking some time  to visit and ponder on the dark past of history. I had a surreal experience. It’s hard to describe this place where the first atomic bombing in human history took place. It is a stark reminder of devastating effects of atomic bomb.

Even half a day is enough to visit the memorial. We went on a day trip to Hiroshima on our own from Kyoto. We took a bullet train from Kyoto to Hiroshima and it took us two hours and twenty minutes approximately. You can also plan a visit from Osaka which is much closer to Hiroshima than Kyoto. To reach the memorial we took a tram(streetcar) from the JR Hiroshima Station. It took us 15 minutes. The Memorial is located at the center of Hiroshima city surrounded by water and greenery. It is a very calm and peaceful place.

At 8:15 am on August 6th, 1945, the city of Hiroshima fell victim to the world’s first atomic bombing. The entire city was virtually leveled, a total of 140,000 precious lives were lost.

The A-bomb Dome was an industrial promotion hall that was constructed in 1915. When the bomb fell, it instantly killed everyone in the building and the flames enveloped the ceiling of the dome and burnt the entire building. The parts of the walls which withstood the blast because it came from above, together with a dome-shaped steel frame have become a symbol of Hiroshima because of it’s shape and circumstances. It came to be called as A-bomb Dome. It is also the world heritage site.

Sprawled across an area of 122,100 square meters is the park that was completed after the war. Within the park there are many memorials like Cenotaph and the Children’s peace monument. The park is scenic and beautiful.

Housed inside the park is the Peace Memorial Museum. The museum exhibits show Hiroshima before and after the bombing. The museum also displays the belongings left by the victims, photos and other materials that convey the horror of that event.

Working hours: The museum is open throughout the year except December 30th and 31st.

Kids below 12 are free